Why Mask Mandates and Culture are Worth Resisting

I posted this in my Facebook Texas Constitutional Enforcement group on July 2, 2020. I just reread what I said three months ago, now, and don’t think I got anything wrong.

OK. With the governor’s latest mask edict today (his 29th executive order of the COVID-19 scare), I had to do a gut check. He continues to double down on the idea that he gets to tell us what to do, changing at the drop of a hat. And I am so very tired of it all.

And the establishment, which is VERY good at propaganda, including Abbott, tells us that we are selfish and uncaring if we refuse to wear masks, now. (Even though at the beginning of this scare, they told us masks really don’t work and may actually be harmful.) They tell us that we are threatening old people and vulnerable people by not wearing masks. They say, “What’s the big deal for the small inconvenience of wearing a mask if you might save a life?” And, there are so many constitutional violations, why are you choosing this place to draw a line in the sand? Friends who profess to be for liberty tell me that it is bad optics to take a stand on masks, playing into the progressives’ hand, further alienating liberty advocates from the majority of the public.

And after doing that gut check . . . . sorry I don’t buy it. I think resistance to the dictatorial regime we are living under is vital in protecting liberty in the future.

You see, we KNOW that for progressives and other totalitarians who want to rule our lives, the issues are NEVER the issues. THE issue is always more power for them over our lives.

There are two burning essences for progressives. First, they really, really want you to know that they are caring, good people, and they are NOT whatever is defined today (not yesterday) as a bad person. It is even better for their psyche if they can have us know that they are good while getting to show that we are really bad. Second, they really, really want to force other people to bend to their will – through psychological, sociopathic manipulation if possible, but brute force is just fine, too.

I am very aware that reason and logic and science will not persuade those that want to rule us, or persuade the gullible who have been following the progressive pied-pipers on every assault on liberty and common sense that they decide to launch. That is one reason why I am not persuaded that staying silent on masks will make those followers any more amenable to liberty in the future.

But I make my decisions on reason and logic and science and principles derived therefrom. And all of that tells me that this is the issue. This is the time. This is the place to take a stand.

Since this is a group dedicated to rule of law and preserving, protecting, and defending the Constitutions of Texas and the U.S., let’s start with the constitutional arguments why this mask mandate by the governor is wrong:

1) Separation of powers – Article 2, Section 1 of the Texas Constitution says that only the legislature can establish acts for which punishment is due. When the governor does it, he is violating the Constitution and a fundamental structural protection against dictatorship. We are seeing the impact of perpetual, mercurial, arbitrary, irrational, unequally applied edicts as they whipsaw businesses in Texas, devastating life-savings and dreams, livelihoods, employment, and the Texas miracle that was based on the predictability of rule of law.

2) Due course of law – both the lockdowns and mask mandates contain within them an assumption that apparently healthy people are guilty of being threats to others. People are being punished – not for threatening the immune-compromised lives which is the justification for the stated “crime” – but for engaging in normal life. This presumption of guilt without even the chance to prove innocence from hurting anybody is a fundamental violation of due course of law.

The executive orders with penalties for the general public are also not authorized by the Texas Disaster Act as the governor claims.

The governor claimed in his video announcing the mandate that he has scientific studies to back up his claim that masks help slow the spread of disease. I have not seen such. I have seen a video of a scientist who claims to have reviewed all of the studies on this subject, and that NONE of the properly designed, controlled studies showed any statistical evidence of helping.

Certainly, I have seen no study that says that if an immune-compromised individual (or a person who lives with them) wears an effective mask, such as an N-95 mask, that there is any benefit whatsoever to forcing or shaming apparently healthy people into wearing masks, too. Why do we have to shame or force people into “protecting the vulnerable” when the vulnerable and those close to the vulnerable can protect themselves?

The governor claims he had to get drastic again because of the surge in reported cases of COVID-19 in Texas, and that spare hospital capacity is getting low. But I heard a report on the Michael Barry show this evening from a well-placed executive of a Texas hospital system who claims that he sees nothing alarming in the numbers we are seeing.

First, the surge in positive cases is coming from increasing testing and coming primarily from people in their thirties. When they get tests, usually driven by their employers telling them to get them, and they show up positive, their cases are very mild and they are recovering quickly. This is what Is called the development of herd immunity. (And by the way, as a member of this group points out, if you discredit the idea that immunity will last, you discredit the need or efficacy of vaccines.)

I literally laughed out loud when I heard the governor’s speech this afternoon trying to scare young people about the spread. He said something like, with this rapid spread you are going to get it, even if you are asymptomatic. Having something that has no symptoms is something to be feared? To quote Outlaw Josey Wales’s movie commander, “Don’t piss down my back and tell me it is raining!”

As to hospitalizations, everyone knows that the federal government is paying hospitals more if they classify cases as COVID-19. (This is also causing reported COVID deaths to be higher than actual.) We know that the governor’s dictates in the early stages of the scare that non-COVID “elective surgery” be put on hold, that there is a backlog of people needing treatment from health service providers. Who knows how many people died from providing COVID-19 privilege to some and making second class citizens of those with other diseases. Certainly the effects of the governor getting in between the patients and their doctors earlier this year is still being felt in our health care system. And the nature of the demand for COVID-19 treatment is very different with the current, younger, healthier population with the disease than it was for the older patients who initially were hospitalized.

The experts closest to the situation do not see the numbers the way the governor does. The death rates are more and more looking MUCH lower than initially projected. The fear-mongering of the government and the establishment just won’t hunt, anymore.

And, one other thing, the more we slow the development of herd immunity, the longer those who would rule us think they get to run our lives.

No more. Enough Is enough!

See, this group knows that the lockdowns and the mask mandates are just lining us up for ever more intrusive (and lucrative for the cronies) dictates to come. Mandatory, risky vaccines. Mandatory electronic proof of vaccination to do anything. And who knows how much more of the rollout of the technological tools for the implementation of the police state are coming.

Our framers knew that a stitch in time saves nine. They knew that the time to stop dictators is early in the game, not later. It always is easier sooner, and harder and more costly later.

Flip any virtue signaling directed at us on its face. It is selfish to try to use the force of government to change other people’s behavior, especially when all the protective measures being urged on us can be used by those who are at risk to effectively protect themselves. And it is selfish to try to demonize others to make yourself feel good.

There is no logic in telling others that they must have their liberty restricted so that someone else’s liberty can be expanded.

Recognize that social science says that only about one-sixth of the population thinks and acts on their own judgment. Everyone else is some kind of follower. Let us in this group be the leaders that others follow, not ones who cower in fear that someone will think poorly of us.

To those who mock us, saying we are making a big deal over something minor, ask why they are making such a big deal of it, then. Don’t start nothin’, won’t be nothin’.

So, I will continue to do everything I can to resist these dictatorial edicts by Texas elected officials. I am working on building on a network of attorneys who understand the constitutional and legal issues and are willing to file more lawsuits or to defend those who get cited while resisting.

If you resist, ask for a jury trial, and make the case that these citations are not law, and are therefore null and void and should be treated as such. Then find an attorney to help you appeal if you lose.

Continue or start letting your city, county officials know how you think. Let your state legislators know. We will be in January in a new legislative session soon enough where lots of this can be fixed if the legislators are motivated enough by public pressure.

If there is widespread resistance, those who would rule us cannot prevail. (And by the way, this is not civil disobedience. The governor is not our daddy or master, and we are not bound to obey his edicts. This is real resistance. Resistance to tyranny.

Finally, I hope the meme I created is understandable. It takes the classic Come and Take it Flag, replacing the cannon with a man and a woman with bare faces. It is meant as a quintessentially Texas defiance to others who have the mistaken notion that they have the authority to tell us what to do. 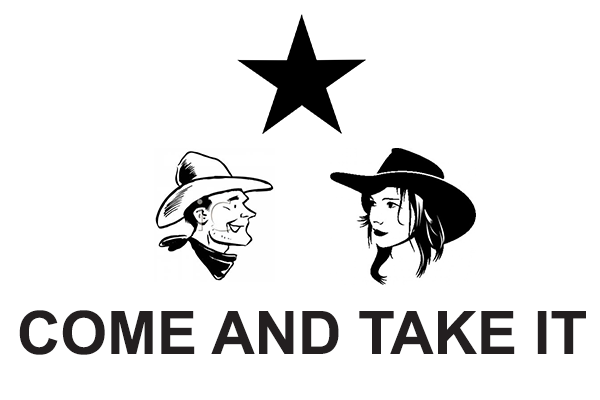