On August 26, 1774, the leaders of Suffolk County, Massachusetts (which included Boston) and surrounding counties gathered at what they called the Suffolk County Convention of the Committees of Correspondence to discuss what to do about the dire situation facing them.

The situation indeed was dire.  Ever since the end of what the Americans called the French and Indian War in 1763, the Parliament and King in Britain had been trying to repay their debts for the war from taxes collected in America and more importantly to deny the self-governance of the colonies, exerting their absolute power to tax and regulate the people of the colonies in America.

This history of Massachusetts from 1765 through 1774 was a series of British taxes and liberty deprivations, each resisted by the colonists, resulting in brief respites only to see another round of tyranny spring up again.  Each worse than the last.

In response, the empire really struck back, passing from March to June of 1774, multiple laws to deny liberty to the colonists.  The Brits called them the Coercive Acts.  (Evidently, they had not figured out how to lie with the name of legislation, yet.)  The colonists called them the Intolerable Acts.

The Intolerable Acts closed the port of Boston until the colonists reimbursed the British East India Company for the tea dumped during the Tea Party.  They revoked the charter under which Massachusetts was formed and put Massachusetts directly under the dictatorial control of the British government.  All local leaders were to be appointed by the colonial governor, parliament, or the king.  They moved any trials of governmental officials out of Massachusetts back to England.

The convention was a discussion about what to do about the Intolerable Acts.  The people of Massachusetts, especially of Boston and Suffolk County were living under a military dictatorship.  They were denied a substantial part of their previous livelihoods, and the leaders were increasingly facing the prospect of being arrested for speaking out against the deprivation of the liberty of the people.

The Suffolk Resolves were a wonderful mix of statement of first principles, an explanation of why they were acting, and detailed acts of resistance planned.

The Suffolk Resolves were essentially constitutional enforcement.  They declared the Intolerable Acts to be violations of the natural rights, the British Constitution, and an illegitimate assault on their own local government’s foundational document – the Massachusetts Charter.  And then they said how they were going to resist.

While maintaining the fiction that the king was unaware of the acts of his ministers and Parliament so that they could profess allegiance to the king, the authors of the Suffolk Resolves made it VERY clear that they would not submit to rule by Parliament or the king that violated natural rights, the British Constitution, or their basic colonial charter.

When you stand up to a bully, what happens next depends on the bully.  He can back down . . . or he can double down.  Bully George III was not going to back down.  He doubled down by instructing the colonial governor of Massachusetts to clamp down hard on the colonists and their leaders, sending more troops and three highly respected generals to help in the crackdown.

That, of course led to Lexington and Concord and the battle of Breed’s Hill in which the author of the Suffolk Resolves, Dr. Joseph Warren gave his life for our liberty.

Here is a link to the text of the Suffolk Resolves.  It is well worth every American’s time to read the stirring, clarion call for liberty by those who stood and fought for our liberty.

Here are my favorite parts, partly because they challenge us to think about our own dire situation, and what we should do:

Preamble:  Whereas the power but not the justice, the vengeance but not the wisdom, of Great Britain, which of old persecuted, scourged and exiled our fugitive parents from their native shores, now pursues us, their guiltless children, with unrelenting severity; and whereas, this then savage and uncultivated desert was purchased by the toil and treasure, or acquired by the valor and blood, of those our venerable progenitors, who bequeathed to us the dear — bought inheritance, who consigned it to our care and protection, – the most sacred obligations are upon us to transmit the glorious purchase, unfettered by power, unclogged with shackles, to our innocent and beloved offspring.

On the fortitude, on the wisdom, and on the exertions of this important day is suspended the fate of this New World, and of unborn millions.  If a boundless extent of continent, swarming with millions, will tamely submit to live, move, and have their being at the arbitrary will of a licentious minister, they basely yield to voluntary slavery; and future generations shall load their memories with incessant execrations.

On the other hand, if we arrest the hand which would ransack our pockets; if we disarm the parricide who points the dagger to our bosoms; if we nobly defeat that fatal edict which proclaims a power to frame laws for us in all cases whatsoever, thereby entailing the endless and numberless curses of slavery upon us, our heirs and their heirs forever; if we successfully resist that unparalleled usurpation of unconstitutional power, whereby our capital is robbed of the means of life; whereby the streets of Boston are thronged with military executioners; whereby our coasts are lined, and harbors crowded with ships of war; whereby the charter of the colony, that sacred barrier against the encroachments of tyranny, is mutilated, and in effect annihilated; whereby a murderous law is framed to shelter villains from the hands of justice; whereby that unalienable and inestimable inheritance, which we derived from nature, the consti­tution of Britain, which was covenanted to us in the charter of the province, is totally wrecked, annulled and vacated, – posterity will acknowledge that virtue which preserved them free and happy; and, while we enjoy the rewards and blessings of the faithful, the torrent of panegyric will roll down our reputations to that latest period, when the streams of time shall be absorbed in the abyss of eternity.

These are my favorite of the resolves:

Resolve 2: That it is an indispensable duty which we owe to God, our country, ourselves, and posterity, by all lawful ways and means in our power, to maintain, defend, and preserve those civil and religious rights and liberties for which many of our fathers fought, bled, and died, and to hand them down entire to future generations.

Resolve 3: That the late Acts of the British Parliament for blocking up the harbor of Boston, and for altering the established form of government in this colony, and for screening the most flagitious violators of the laws of the province from a legal trial, are gross infractions of those rights to which we are justly entitled by the laws of nature, the British Constitution, and the charter of the province.

Resolve 4:  That no obedience is due from this province to either or any part of the Acts above mentioned; but that they be rejected as the attempts of a wicked Administration to enslave America.

Resolve 11:  That whereas our enemies have flattered themselves that they shall make an easy prey of this numerous, brave, and hardy people, from an apprehension that they are unacquainted with military discipline, we therefore, for the honor, defense, and security of this county and province, advise, as it has been recommended to take away all commissions from the officers of the militia, that those who now hold commissions, or such other persons, be elected in each town as officers in the militia as shall be judged of sufficient capacity for that purpose, and who have evidenced themselves the inflexible friends to the rights of the people.; and that the inhabitants of those towns and districts who are qualified, do use their utmost diligence to acquaint themselves with the art of war as soon as possible, and do for that purpose appear under arms at least once every week. (This led to the creation of the Minutemen that played such an important role seven months later.) 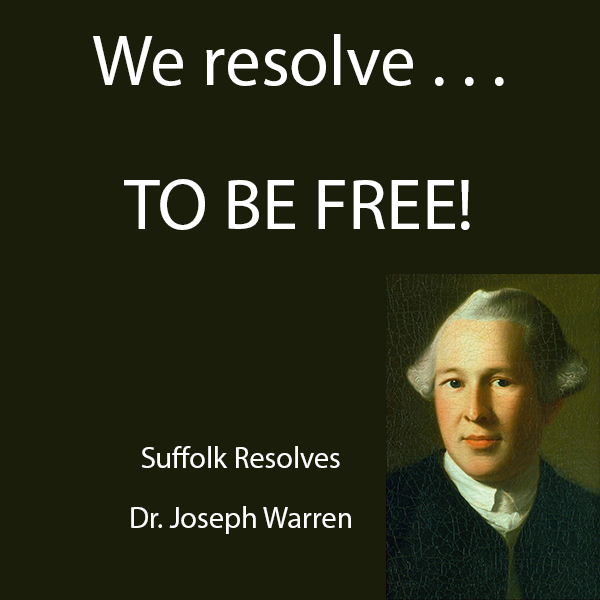 Note that this meme is not a direct quote of Warren or the Suffolk Resolves.  It is, rather, a wonderful, pithy summary of them that I discovered in the highly recommended and wonderful work of historical fiction called “The Adversaries: A Story of Boston and Bunker Hill” by Ned Ryan.