The Boston Tea Party and Texas Resistance to the Great Reset

On the evening of December 16, 1773, the Sons of Liberty in Boston implemented the famous Boston Tea Party.

The action of pro-liberty forces against the property of a private corporation, the British East India Company has much relevance, today.  It has special relevance to Texans as we approach the 88th Texas Legislative session where we will try to stop violations of the natural and unalienable rights of Texans by private corporations.  The framers knew that it was not just government, but also private actors that can violate our rights.  And they had no problem with directing action against private corporations when those corporations were threatening their liberty.

The Boston Tea Party was another resistance in a series of attempts by the British Crown and its beneficiaries to rule Americans.  The Americans insisted that they had the right to self-government.

The battles began with the Stamp Act in 1765.  Sons of Liberty chapters sprung up all over the colonies and not a penny of stamp tax was collected due to resistance.  The Parliament repealed the Stamp Act in 1766, but replaced it with the Declaratory Act, stating that the Parliament “had hath, and of right ought to have, full power and authority to make laws and statutes of sufficient force and validity to bind the colonies and people of America . . . in all cases whatsover.”  They had to show those peasants in America who was boss, don’t you know.

The Parliament followed up in 1767 with the Townshend Acts in 1767, imposing duties on a good number of products imported into the colonies.  The resistance in the form of smuggling and boycotts caused such losses for British merchants, that the Townshend duties were repealed in 1770.  All except one, that is – the duty on tea.  The Parliament still had to show who was boss.

Effective resistance continued against the duty on tea, so Parliament passed the Tea Act in 1773 granting the British East India Company monopoly powers on tea to the colonies and a cut of the duties it raised for the Crown, thereby making it not only the only legal vendor, but the lowest cost vendor, to boot.

More boycotts and resistance ensued, setting up the Boston Tea Party, where Sons of Liberty men dressed as Indians, dumped the British East India Company tea from three ships into the harbor. 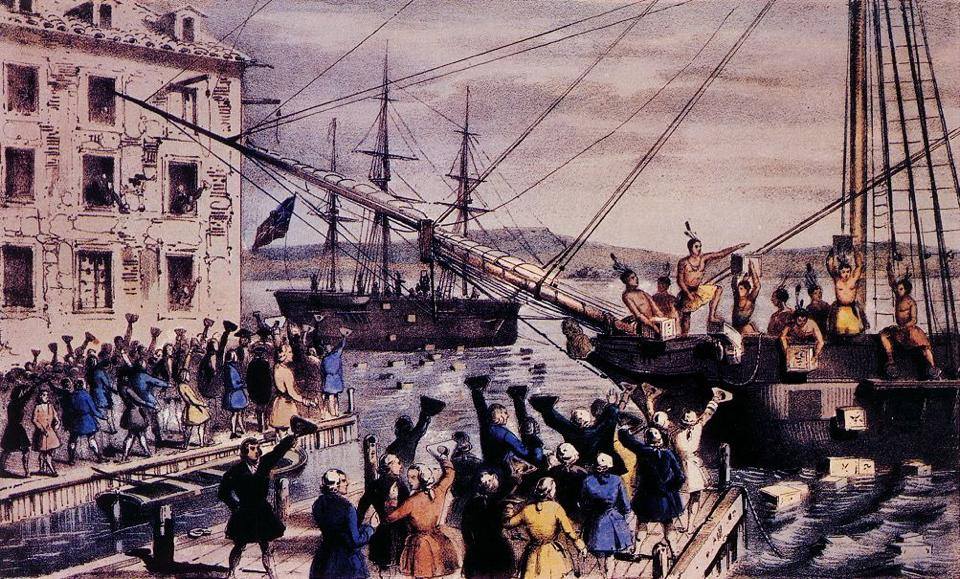 Parliament reacted to the Boston Tea Party with what the colonies called the Intolerable Acts, which quartered troops in Boston, shut down the harbor of Boston, and contained other punishments for Massachusetts.  By August 26, 1774, the Massachusetts patriots passed a stirring document of resistance called the Suffolk Resolves that presaged the Declaration of Independence.  By April of 1775, the American Revolution had sparked in Lexington and Concord outside Boston.

We are in our own struggle for self-government against globalists who want to reverse the victories of the American Revolution and return to an oligarchy where they rule and we are serfs serving them.  If I have anything to do with it, Texas will continue our resistance in 2023 to those globalists and their Great Reset.