This week could go down in Texas and American history as the week the tide turned in the global advance of tyranny into Texas.

I have often wondered what issue would be the flash point to activate Texans to draw a line in the stand and tell the collectivists and the cronies and the globalists that they will advance no further in taking the liberties of Texas.

We have now seen the issue that has mobilized Texans to take the stand – federal vaccine mandates.

1) the 10 to 20% of the workforce of Texas that is willing to be fired from their jobs to not take the jab; and

2) the president of the United States declared intention to dictate that different sets of Texas employers be fined if they do not do the dirty work for the feds and fire employees who decline the jab.

The problem for employers is that if they agree to do the dirty work of the feds, they lose the best of their work-force and their ability to meet the needs of their customers.

Texas businesses and employers are already suffering from supply-chain shortages, making it difficult for them to do business. What many are realizing this week – certainly the governor is realizing it - is that when most Texas businesses lose 10 to 20% of their brightest employees, the economy of Texas will tank even more, causing untold billions in damage to our economy, our supply chain, and destroying even more lives, livelihoods, and fortunes in Texas.

If you have read Atlas Shrugged by Ayn Rand, this is a real world playing out of “Going Galt” in 21st century Texas.

This is an inflection point in the history of Texas and America. The words of Samuel Adams come to mind, and perfectly fit this time:

If we suffer tamely a lawless attack upon our liberty, we encourage it, and involve others in our doom. It is a very serious consideration that millions yet unborn may be miserable sharers of the event.

This afternoon and evening, October 13, 2021, the House State Affairs heard testimony on the bill Chair Chris Paddie chose to address the governor’s call on stopping COVID vax mandates. The portion of the hearing I heard told me that many of the old school legislators, especially Chris Paddie and the very vocal Democrats on the State Affairs Committee do not understand that we are not in a business as usual situation. The hired lobbyists of the business interests in Texas, especially the health care industry was lockstep in the notion that they were willing to violate the rights of Texans to avoid trouble from the feds, but clearly not understanding that the workers of Texas make it where they CANNOT do the dirty work of the feds and remain unscathed.

In case you did not know it, Texas businesses and managers, the right thing to do in this situation is to fight the feds to stop them from telling you how to run your business.

Let us address the unalienable right to decline vaccination first. We are blessed in America with a document that tells us the fundamental principles upon which we are founded – the Declaration of Independence. It says that we “are endowed by our Creator with certain unalienable rights” and that governments – especially our governments – are instituted to “secure these rights.” 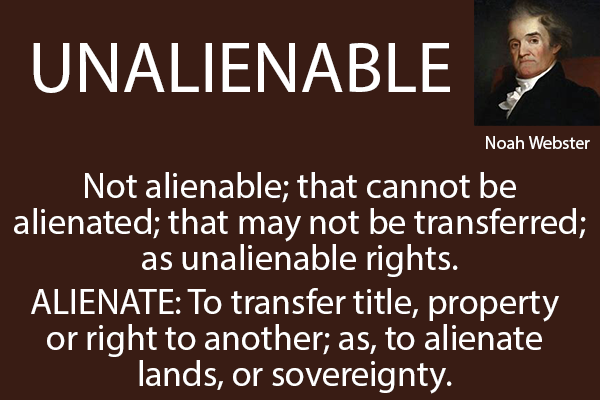 The framers also believed that private actors could violate rights as much as government. And they saw their role as securing rights from both private and governmental actors.

The right to decline vaccination falls solidly in line with those other unalienable rights, and it is the violation of the right to decline vaccination that is causing the problems for Texans and our economy. Benito Juarez said, “the basis of peace is the respect for rights.” No justice, no peace. There are sufficient numbers of Texans now, that our economy will back in the saddle until the feds (and Texas employers) stop the war on the unalienable rights of Texans.

HB 155 by Tom Oliverson, heard October 13 in State Affairs says that no Texas establishment (private or governmental) may not require a COVID-19 vaccination “to enter or gain access to, receive a service from, or be employed by” that establishment. He put a private right of action in court against establishments violating this statute that allows “injunctive or equitable relief or for compensatory or punitive damages.” His bill actually allows employer mandates, but requires them to accommodate exceptions for natural immunity, medical reasons, religious or conscience reasons. He thinks that by carving out exemptions in Texas law, that the feds, when they actually get around to formulating the rules to implement the president’s dictates, will allow those exemptions in Texas law.

During the hearing, we heard the lobbyists say that businesses don’t want mandates from either Texas or the feds, but they were opposed to the bill because they figured resistance is futile against the federal government. We heard medical service providers say that they fear that the new conditions put into Medicare and Medicaid mean that stopping them from getting paid by those federal programs.

We heard Texans for Lawsuit Reform (TLR) say that Texas workers would just abuse the enforcement provisions of the lawsuit to shake down Texas businesses, so no protection of the unalienable right should even be attempted. (By that TLR "logic", we should get rid of laws against employers discriminating on race and sexual harassment.)

We heard soon-to-be-retired Chair Paddie express reservations about the bill. He also expressed that he did not see why we needed to act quickly.

In other words, the establishment of Texas thinks this is business as usual.

The people of Texas and the governor know it is NOT business as usual.

It appears to me that the legislature, especially the State Affairs Committees of both the House and the Senate and especially Chair Chris Paddie of the House State Affairs need to hear from you that this is NOT business as usual. That the Texas economy and the lives of Texans are being destroyed NOW. And we need action to stop the rights violations by employers and the tyranny by the feds NOW. And that we respectfully ask them to vote FOR HB 155.

At the end of the evening, Rep. Oliverson said that he would modify the bill in hopes of getting more support from the State Affairs Chair, the State Affairs Committee, and the House as a whole. Revise penalties in lawsuits. Work on conscience exemption. Work with healthcare industry to carve out exceptions for businesses that serve immuno-compromised patients.

Note that whether a bill passes in the next week or not, I think that Texas worker resistance will make compliance painful to both the employers, the Texas economy, to the feds, and to our military readiness. If the state legislature will not help us, we move to the counties, including our county prosecutors using the Texas Official Oppression Act (Texas Penal Code 39.03) to prosecute federal agents who try to enforce the federal mandates. That will further stop the feds from messing with Texas employers and Texans in general.