Texas is watching this legislative session to see whether our legislature will insure that the tyranny in the name of COVID that Texans endured this last year will never again be repeated in Texas.

Texans do not believe the big lie perpetrated by the establishment that dictatorial power saves lives during a pandemic.  We know that dictatorial command and control destroys lives and livelihoods and it kills people.  We know that freedom provides Texans the flexibility to adapt to what nature throws us.  Freedom allows us to take the risks we want in light of our own circumstances, life goals, and risk tolerances and it allows us all to maximize the happiness for ourselves and our families.

We want our government to surge resources where they are needed during a disaster and to provide information to us so that we can make decisions for our families that we think will best help them survive and thrive.

We recognize that the Texas Constitution does not allow dictatorial action during emergencies.  We understand – as the framers of the Texas Bill of Rights understood -- that if bad actors in government think they can gain complete control of us during emergencies, they will manufacture emergencies to get that control. 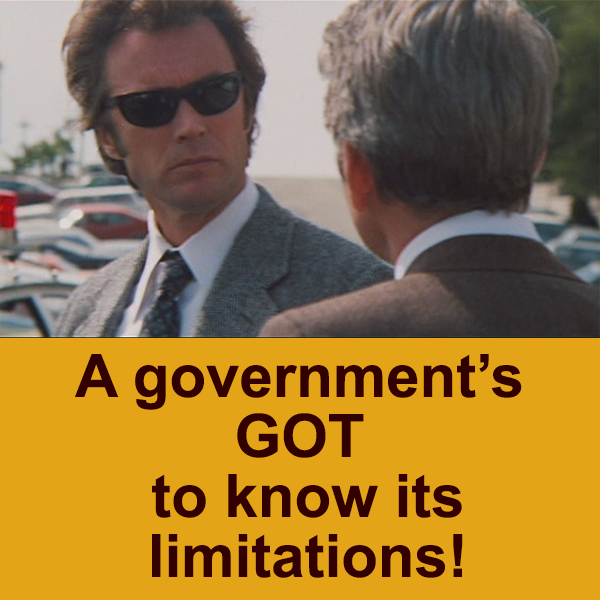 If there is a watchword for where we go in the future, it has to be, “A government’s GOT to know its limitations.”

We know that the Texas Bill of Rights is a list of limitations on government power during an emergency.  We liked the first sentence written by the Texas Supreme Court on those limitations as COVID progressed, “The Constitution is not suspended when the government declares a state of disaster.”  But we were disgusted when that very court has used procedural dodges to allow the executive branch at multiple levels to violate numerous provisions of the Texas Bill of Rights during this last year.

So, how are we supposed to fix this for the future?  The legislative answer lies primarily in what we do about modifying the statute called the Texas Disaster Act (Chapter 418 of the Texas Government Code), which the executives in Texas at the state, county, and municipal levels claimed was a delegation of power to them by the legislature during a disaster.

Two issues not mentioned often enough are: 1) the executives seized power way beyond that delegated by the Texas Disaster Act, and 2) the executives seized power that violated the natural rights of Texans protected by the Texas Bill of Rights.  The whole idea of natural rights and the protection of them in Bills of Rights is that NO actor in government can violate them.  In other words, delegation of the power to violate the rights of Texans to an executive is not the legislature’s to give.

So, what limitations do we need to explicitly write into the Texas Disaster Act for the future?  Consider this to be the wish list for what legislation we need to see come out of this legislative session:

If these limitations are added to the Texas Disaster Act, the worries about a governor becoming a dictator will be far less.  But there is one more structural change needed to procure liberty for our posterity.  We need to get the legislature quickly involved in decision making in widespread disasters.

So where are we so far this session in progress toward this vision?

SB 1025 by Senator Birdwell has passed the Senate and is now in the House State Affairs Committee.  It does a number of things, the most significant of which is that it insures that executive action will never again create lockdowns in Texas.  It also implements a proposed constitutional amendment to require legislative action to extend widespread disasters (or emergencies) beyond 30 days.

SJR 45 by Senator Birdwell is the proposed constitutional amendment that requires legislative approval to extend a widespread disaster or emergency beyond 30 days.  Constitutional amendments require 2/3 approval in both chambers and a vote of the people.  The governor has no say in the process of amending the Texas Constitution.  I expect that the House will provide an overwhelming bi-partisan vote for this proposed amendment.  It passed the Senate with only one vote in opposition.

Companion bills SB 18 (Brandon Creighton) and HB 1500 (Cole Hefner) have passed their respective chambers with only a small difference in wording between them.  They limit future executives from messing with guns, gun sales, and shooting ranges in future disasters.

HB 3 was planned by House leadership to be an omnibus bill limiting executive overreach, but despite its limitations on firearms and religious gatherings and an attempt to address civil liability, the grassroots viewed it as a bill that ratified and codified what happened, falling far short of what was needed to prevent future executives from engaging in tyrannical acts.  The outcry about HB 3 was so great, that the consensus at the Capitol is that it is dead.  Therefore other vehicles will be used to achieve limitations on future executives during disasters.

So, how do we get more than just a call of the legislature after 30 days of widespread emergencies, and limitation on lockdowns, firearms restrictions, and infringement on religious liberty?

Most political players realize that the only legislative vehicle where additional limitations can be added as amendments is SB 1025 as it moves through the House.  The firearms and religious liberty bills are single topic bills that make amendment under parliamentary rules difficult.  Only SB 1025 is broad enough in scope to allow amendment at this stage of the game.

As of this writing, Senator Birdwell has not yet found a House sponsor to steward SB 1025 through the House.  I am told that he expects to negotiate that by the middle to end of next week (April 23).

It is time to start talking to motivated House members or the House sponsor to prepare amendments for SB 1025.  I certainly plan to do that!  An engaged grassroots still has the ability to improve that bill to get us to what we need to protect the liberty of our posterity in Texas.