After listening to the Texas House State Affairs Committee testimony about Committee Substitute HB 3 on March 11, 2021, I will be submitting on behalf of the Texas Constitutional Enforcement eight listed amendments below.

A lot of the discussion focused on how to get the legislature involved to reign in the governor or other executives if they become dictatorial.  I came up with my best solution on that in Amendment 7.  But I realized that most of the destruction wrought in 2020 was because there were not enough explicit limitations on the delegation of power to the executive in the original Texas Disaster Act.  Most of these amendments fix that problem by insuring that future executives will not think they have the power to become dictators or violate the natural rights of Texans as they assist our health professionals cope with increased demand. 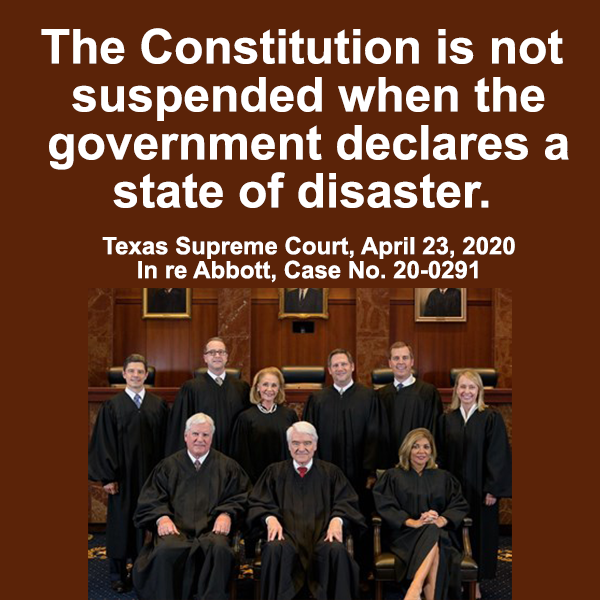 Idea:  Many people testified about how the edicts by the governor to health care facilities to stop “elective” surgery in an attempt to free up space for anticipated COVID patients had the effect of causing deaths from other diseases like cancer that could have been avoided if not for the edict.  Sadly, it has been reported that many health institutions lost money due to these edicts because COVID demand did not materialize and desperately needed resources went un-utilized.

The irony of this action is that while the propaganda was telling people to trust the experts, the government denied health care professionals with the most medical training and experience as well as the knowledge of the demand situation on the ground to make the decisions they were best suited and situated to make.

The medical profession is trained to handle triage in high demand situations.  Command and control in such situations kills people.  Government’s role in high demand situation is to help surge resources – including personnel, housing, and PPE to meet demand.  If it tries to manage demand or privilege those with one disease over another, the deaths it causes can be higher than that caused by the pandemic.

Suggested Amendment:  In Sec. 418A.004, add the following limitation:

(11)  permit any governmental official to instruct a health care facility or professional to give preference for one patient or disease over another or defer treatment to some to free space for others.  Triage in high demand for health services is the responsibility of the provider, not government.

Idea:  If Article 2, the Separation of Powers provision of the Texas Constitution, means anything, it means that the executive cannot define the criminal act via executive order to which a statutorily pre-defined criminal penalty is applied.  Combining the definition of a crime with the enforcement of that crime into one branch is a quintessential violation of separation of powers.

No open-ended criminal penalties should be included in either HB 3 or the original Texas Disaster Act.

Removing the open-ended criminal penalties from HB 3 and the Texas Disaster Act will do more to stop future tyranny than any other legislative action.

Idea:  It is lockdowns that created the economic damage and destruction of livelihoods, life savings, businesses, and dreams of millions of Texans, destroying the Texas Miracle. Lockdowns are tyranny that violates the individual, natural rights protected in the Texas Bill of Rights that “shall forever remain inviolate.”  No branch of government, executive or legislative has the power to impose lockdowns. As such, any response to this past year must clearly and unambiguously prohibit future lockdowns. Looking back, statistics now show that the only thing lockdowns flattened were liberty, lives, livelihoods, and health care.

Suggested Amendment:  In Sec. 418A.004, add the following limitation:

(12)  permit any governmental official to force a closure of the business or limit the capacity of use of a business.

Idea:  Mask mandates violate due course of law as protected in Article 1, Section 19 of the Texas Constitution.  A fundamental principle of due course of law is presumption of innocence until guilt is proven.  Mask mandates presume everyone guilty of being a contagious threat to others, even though only small fractions of the population might be unknowingly dangerous to others.  Mask mandates build the presumption of guilt into the definition of the crime when there is no probable cause for such presumptions. Mask mandates are implemented in a way that disrespect many individual’s real inability to wear them. Mask mandates are based on junk science.  Although theories abound about why they help, the actual controlled tests of mask usage and actual statistical comparisons between similar demographic regions with different mask policies show no appreciable benefit from mask mandates, Mask mandates would never pass a scientific reliability causation challenge in a tort case in Texas. Mask wearing creates psychological and physical trauma in many.

(13) permit any governmental official to impose mask mandates on the general public or fine businesses for not imposing mask mandates in their facilities.

Idea:  Every person has the natural, unalienable right to refuse vaccination.  Explicit prohibition of the power to force vaccination or make vaccination a condition of the provision of governmental service, travel, or employment should be included in the bill.

Idea:  Article 2, the Separation of Powers provision of the Texas Constitution prevents the legislature from delegating the power to modify election law to the Secretary of State.  It is bad enough to delegate such power to an elected governor.  It is even worse to delegate to an unelected executive.

Suggested Amendment:  Strike in its entirety, 418A.103.  LIMITATION ON ALTERATION OF VOTING PROCEDURES.

(15) delegate to any governmental official the authority to modify the Texas Election Code.

Suggested Amendment:   Remove Section 1 (which creates the Pandemic Disaster Legislative Oversight Committee) of the current CSHB 3 in its entirety. And, replace Sec. 418A.053 with the following:

(b)       A state of pandemic disaster may not continue for more than 30 days unless renewed by the legislature.

(d)       An executive order or proclamation issued under this section:

(A) a description of the nature of the pandemic disaster;

(B) a designation of the areas affected or threatened; and

(2) must be posted on the Internet website of the governor ’s office and any state agency whose authority is affected by the order or proclamation.

(e) The governor shall:

(1) promptly disseminate an executive order or proclamation by any means intended to bring its contents to the attention of the public; and

(2) unless the circumstances related to the pandemic disaster prevent or impede the filing, promptly file the order or proclamation with:

(B) the secretary of state; and

(C) the county clerk or municipal secretary in each  area  in  which  it  applies.

Idea:  Prohibit anyone from thinking that the declaration of a pandemic disaster creates any new legal duty for a negligence claim.

(16)  create any new legal duty for a negligence claim.