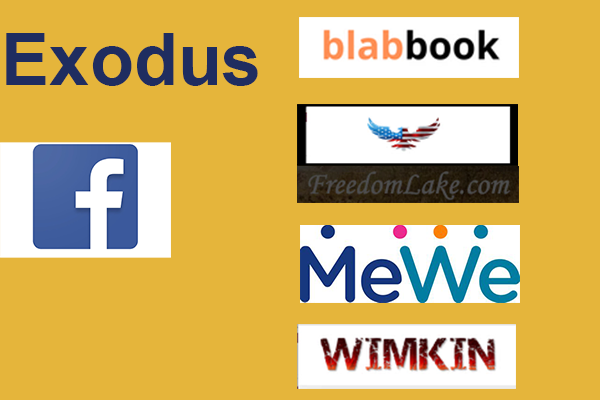 As anyone who is paying attention knows, Facebook is suppressing speech of liberty-oriented people and accelerating the complete destruction of large groups advocating on liberty topics.

Just last week alone, Facebook destroyed the wonderful This is Texas Freedom Force page that had over 90,000 likes.  That is the group that has done yeoman's work in stopping George P Bush's desecration of the Alamo and on May 30, 2020 literally put their bodies between a mob of thousands and the Alamo to save it from vandalism.

Open Carry Texas had its 30,000 plus group eliminated on Facebook last week.  That is the group that worked to get permitted open carry of handguns in Texas and that has educated law enforcement and the public about the laws of Texas that allow permitless carry of long guns.

Our Texas Constitutional Enforcement group that now has over 5300 members on Facebook was made to completely disappear for 18 hours in late July after we shared a livestream of heroic doctors telling how they had saved lives from COVID (in ways that Big Pharma did NOT want us to know about).

So, we have started preparing for the day when Facebook will permanently ban us by building lifeboats in newly emerging social media sites with Facebook functionality and look & feel.

The services we have set up shop on are listed below.  You can click on the link for each to see the Texas Constitutional Service there:

Blabbook (This service is rapidly growing.  It might be the smallest at the moment, but it is owned by a great conservative Texan, Steve Blu.  And you KNOW how we like to let Texans run Texas around here!)

FreedomLake (This is where Open Carry Texas moved to.)

MeWe  (Where This is Texas Freedom Force has moved to.)

And for completeness, here are the links for Facebook.  We have a group, which is the largest and most active.  And we have a page: